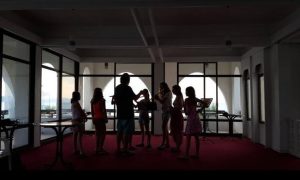 Turgay made great contributions to the great success of flute education in our country with the success of the students he trained as an educator. With the special working techniques and style he created, he became the founder of the system that could be called the Turkish Flute School. Turgay, who has been successful in many national and international competitions with his students, started teaching in 1989 at Istanbul University State Conservatory. Turgay, who has also taught at the Mimar Sinan Fine Arts University Istanbul State Conservatory and Mersin University State Conservatory, founded Halit Turgay Flute Summer School, which he still continues to organize traditionally in 2003. His students still show themselves on international platforms; They continue their education in schools such as the Ecole Normale de Musique de Paris Alfred Cortot in Paris, France, and the Conservatorio Superior de Musica de Vigo in Vigo, Spain. As a productive composer, while continuing to add works to the Turkish Flute Repertoire, he has been working as an Associate Professor at Ankara Music and Fine Arts University since 2018.